The British love their tea. It’s a well established fact. Some Brits, however, see tea as such a fundamentally British thing, that it’s hard to grasp that the contents of their tea bags aren’t actually grown there. That’s what happened to Yorkshire Tea fan Terry.

1. It started when Brexiteer Terry thought Yorkshire Tea was on his side because they want him to drink their tea.

2. Rita is quite amused by his claim that Yorkshire Tea is actually grown in Yorkshire.

WHATS SO FUNNY ABOUT THAT LOVE?

4. Rita happily drops this bomb on him.

5. Since Terry deleted the tweet below, we’ll show you Rita’s screenshot of it. It’s safe to say that he was not happy.

6. He can’t believe his eyes, so he goes straight to the source.

WHERE IS YOUR TEA GROWN? @YorkshireTea

7. THEY HAPPILY GIVE HIM SOME MORE INFORMATION.

AFRICA AND INDIA. HERE’S A THING YOU CAN READ: https://t.co/0RKOGA1Fbp

FUCKING DISGRACEFUL. WHY CALL IT YORKSHIRE TEA IF ITS NOT GROWN IN YORKSHIRE. WONT BE BUYING FROM YOU AGAIN

SORRY, CAN’T HEAR YOU. CAN YOU SPEAK UP A BIT?

10. His world is shattered.

DISGUSTED AT APPALLED. IVE BEEN DRINKING YORKSHIRE TEA ALL THESE YEARS THINKING IT WAS GROWN IN BRITAIN, AND THEN I FIND OUT THIS. EVERYONE NEEDS TO BOYCOTT https://t.co/uRHXZAKZ3y

11. At least he apologises in the end. Sort of.

YOURE RIGHT IM SORRY. READ MY TWEETS THEY REPLIED AND SET ME STRAIGHT. WONT BE DRINKING THAT SHIT AGAIN

It seems like a storm in a tea cup, but, you know…

Thanks for the tip, Dave! 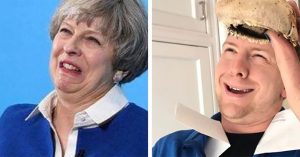