Last night, US President Donald Trump gave his first State of the Union speech. A yearly speech the president gives before Congress on live television, to update the people on how things are going, and what’s ahead in the upcoming year. Obviously social media had a lot to say about it. You can read the full speech here.

We came up with a drinking game for the State of the Union, here's how you play:
-Don't
-You'll die

2. Some people felt a little bit mislead by CNN’s reporting in the lead up to the speech.

Stop getting my hopes up, CNN. #SOTU pic.twitter.com/O0ojpf9jBL

Join me live for the #SOTUhttps://t.co/0SLktWxfHi

Somehow, Trump will claim that there were more people in the room for his State of the Union than Obama's.

Every other sentence has some kind of group of three.

It is lazy.
It is repetitive.
And it is annoying the shit out of me.

7. There was A LOT of applause.

8. Even Trump himself kept applauding his own speech.

9. The State of the Onion shows you what you didn’t see on TV.

Trump asking for unity now is like an Uber driver asking for a 5-Star rating after he’s already crashed into a telephone pole. #SOTU

11. Pray for the poor fact-checkers.

12. Plenty of people thought Trump did a good job, though.

13. Trump brought in a special guest.

This North Korean defector who survived being hit by a train attended Trump's #SOTU address as a special guest. pic.twitter.com/pE1AJ92y9S

14. Traditionally, the opposing party gives their response. This year it was a mouth-watering one by Joe Kennedy. You can watch his full speech here.

Liking what I see in this response from Joe Kennedy. The Dems finally figured out the left wants to hear from the younger generation, with the wettest-looking mouths. pic.twitter.com/E6wpylolhF

15. He chose an… interesting location to give his speech.

Pretty lucky Joe Kennedy's car broke down where he was supposed to give his speech. pic.twitter.com/IcoPCOpPLC

16. But there were more responses.

17. Some people in the room were a little distracted…

18. Everyone has their own favorite moment.

My favorite part of the #SOTU was when Trump showed what his mugshot would look like pic.twitter.com/S7TGqFJGZ9

19. But why bother making a whole speech about it if you could just use one simple picture?

The state of the union pic.twitter.com/dXwLgo9FED 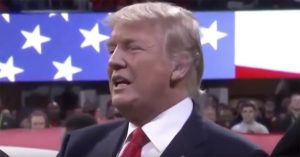