Is this technically a freezer burn?

1. This customer noticed that his DiGiorno frozen pizza didn’t live up to his expectations, so he took to Twitter.

@DiGiorno is this a joke ????? Only half of pizza has pepperoni 🤔🤔🤔 I’d like some FREE pizza because of this pic.twitter.com/cBWTSY6BVR

2. DiGiorno saw this, and had to lay out some facts for him.

3. It was right there on the box. Right in front of his nose.

5. At least he recognizes his mistake.

6. Justin made it even better.

Or at least half a nice day. Know what I mean?

7. One Twitter user thought DiGiorno was being mean, but…

We said to have a nice day?

I mean the guy asked for free pizza like it was someone else’s fault he didn’t read the box. And they did say ‘Have a nice day’

9. DiGiorno wants to make sure the internet can keep enjoying this fail.

In case this gets deleted: pic.twitter.com/iTHQvxhEoP 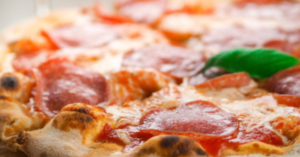