When you’re a big fan of someone or something, it’s only natural that you want to pay tribute in some way. That’s how the people at fastfood chain Carl’s Jr. feel about Steven Spielberg. The master director has a new movie coming out soon (‘Ready Player One’), and for that occasion, Carl’s Jr. thought it would be fitting to name a burger after him. But will he give his approval..?

1. The people at Carl’s Jr. are so pumped for Spielberg’s upcoming movie ‘Ready Player One’ that they want to pay tribute to him.

In honor of Steven Spielberg’s #ReadyPlayerOne, we’re changing the name of our Charbroiled Sliders to #SpielBurgers. Spielberg hasn’t signed off yet, but we assume he’s cool with it. pic.twitter.com/bdpRH0s8fo

2. So they started with tributes to some of Spielberg’s best movies.

3. Obviously ‘Jurassic Park’ is among them.

A tasty Charbroiled Slider based on a movie based on a book about a dinosaur theme park! Give us a ring @StevenSpielberg ! The world needs #SpielBurgers #JurassicPark pic.twitter.com/VGAGHnSBeG

Why did E.T. phone home? Probably to tell his friends about how delicious #SpielBurgers are. Hit us up @StevenSpielberg ! Let’s talk! #ET pic.twitter.com/3byUR9ry6x

5. And ‘Close Encounters of the Third Kind’ got a special Carl’s Jr. twist as well.

We’re calling this one Close Encounters of the Charbroiled Kind. Working title. What do you think @StevenSpielberg? You in? #CloseEncounters #SpielBurgers pic.twitter.com/4YiHp3CGF3

6. Their effort is met with silence from Spielberg’s side.

Hmmm, no word from Spielberg yet. Sure hope he’s cool with it. We pretty much spent our whole marketing budget on #SpielBurgers

7. But there’s a good explanation for that.

You guys, we just realized STEVEN SPIELBERG ISN’T ON TWITTER. Anybody got his digits? #SpielBurgers

8. They decided to bring their artwork to him at the Ready Player One premiere in Los Angeles.

Just rolled up to the #ReadyPlayerOne red carpet premiere with some tasty #SpielBurgers. Hoping to get sign-off from Steven! Wish us luck! #IAMREADY pic.twitter.com/1UV1CrqlcL

9. They didn’t get to talk to him, but at least there’s this…

10. Carl is not giving up, though: he’s taking the Spielburgers to the man himself at his production company.

11. Unfortunately, they were sent away. They did leave a not, though.

Couldn’t get in to see Steven, but we left a note on his car! Fingers crossed! #SpielBurgers pic.twitter.com/fEPbcf5EHE

13. He may not approve of the name, but Carl’s Jr. will take what they can get.

OMG Spielberg likes our Charbroiled Sliders! (He's not down with #SpielBurgers but we're fine with that) #Sliders #ReadyPlayerOne https://t.co/PYtiY7rT8U

Pssst… are you following us on Instagram? You totally should. 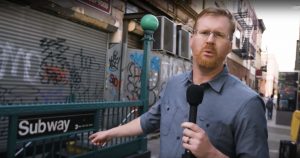