It can be nice to switch up your coffee order every now and then. Add a little something extra. A splash of milk, some syrup, maybe a bit of whipped cream on top. Some people, however, take this way too far…

1. It starts with this tweet by stunned Starbucks employee Jessica Lynn.

Ashley you have to be trolling us right now… pic.twitter.com/Z0KgF79w0X

This is just the syrups yall pic.twitter.com/z6EBleNUNA

3. It’s way cheaper than it looks.

I had the intentions of replying to people but my mentions are a mess now so just an update, yes we made the drink, yes she’s ordered this more than once and this drink would only cost $5.19 thank you pic.twitter.com/wD9jGjea8o

4. So this is what the monstrosity actually looks like…

Made it at our store😂 pic.twitter.com/BLve32nyoA

5. This was bound to happen.

6. It inspires other baristas to share their own crazy order stories – and pictures.

Some orders I’ve gotten. There’s been worse of course pic.twitter.com/iBefNEUUrm

7. Is it even recognizable as coffee at that point?

This one time this girl got a venti dirty chai w/ 15 pumps chai i was shook.

8. If you put a barista through this… at least leave them a tip.

This is from a guy at the store I used to work at 😅 he used to do this once a week for his free drink, no tip, actually drank it pic.twitter.com/AQk27esk07

9. These people do need to be confronted about their behavior.

They order online usually with stuff like this, but at every store I’ve been at the barista calls out the entire drink to make the person think about what they’ve done.

10. And finally, Sarah brings up an interesting point.

I’m so curious how someone arrives at that number. Did she start with like 10 pumps and keep coming back? Gets to 14, and is like…mm, not *quite* there yet. Does 15 <pleasantly surprised> Mm! Decides to try 16…oh, no. Ack. Definitely 15 pumps.

Why would you put a barista through this? It doesn’t need to be this hard… 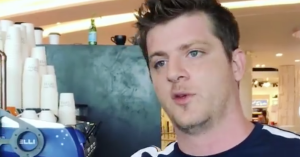