Painfully accurate: these people got mislead by packaging

We don’t always notice it anymore, but all of us know the feeling when opening a bag of crisps and the inside looking like half of it has been eaten already. This is just one of many examples where the packaging looks promising but once opened, the inside isn’t at all. Even though we all know these are marketing trics, sometimes the level of deception is so real you’re not sure whether to laugh or to cry. Below you will find a small selection of such cheating packs and other shameless product designs, which have been collected on Reddit among others.

1. The quantity of Snickers you get when buying two seperate ones is way better than its so called ’two-in-one’.

2. Only the product developers will know what ‘XL’ means.

They introduced the new “XL” from r/assholedesign

Not so well-hung from r/assholedesign

4. Clearly there wasn’t going to be a huge chocolate bar inside of here, but the amount of mini’s could’ve easily been doubled.

Tricked by the packaging of my moisturizing cream from r/assholedesign

6. Nobody wants blue pens only.

Thought I’d buy some coloured pens…. turns out every single one of them has blue ink from r/mildlyinfuriating

Went to Poundland and had the choice between these and After Eights, got these cause they we’re bigger, I paid for air. from r/NonFunctionSlackFill

8. Such a shame, all that extra packaging.

1001 stickers and 768 of them are useless fucking squares. Thanks Disney. from r/assholedesign

10. The image on the packaging will forever win from reality.

So thankful for my singular candy topping from r/mildlyinfuriating

11. Nice golden touch! But only on the first one though.

13. You need quite some spatial awareness for this one.

Bought a coloring book and pencils to keep myself busy while I’m off work. Thought these were full size pencils. from r/mildlyinfuriating

Brought this so called “filled bat’but” in morocco for 1,2$ (pretty pricey over here) to find out later that I’ve been screwed from r/assholedesign

15. Even though de consumer isn’t deceived here, the way they decided to pack raises questions. 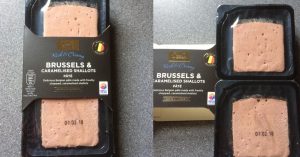