A man named Carl Goldfinch tried to receive a discount by showing supermarket-chain Lidl that he was missing about four inches of crisps in the can that he bought at one of their stores. While he was trying to joke around with Lidl they managed to do the same with Carl. Lidl came up with a pretty great response and there was not much left to do for Carl than just go with it. And he did.

1. Carl added this picture to his tweet to visualize his claim.

@lidl_ireland 4 inches missing from your product. Do i get a discount pic.twitter.com/cAPwk2kFMi

2. Even though Lidl had an explanation, Carl was not amused.

Its deception. Smaller packaging means more tubes on a pallet, less wastage and reduced costs for all

3. Someone else had a pretty accurate response to that.

Must be your first time buying packaged supermarket food! 🤣Also the frozen meal never looks anything like the appetising photo on the box.

Neither do most people's dating profiles

5. Then Lidl decided to reply to Carl’s original tweet and people went nuts. Or crisps, whatever you like.

6. And even though Lidl’s comment was spot on, so is Carl’s reply. Again.

I’m afraid to day and as much as it hurts, you are not the first to have said that to me. Probably not the last

7. All in all, some people took this seriously even though Carl was obviously just messing with Lidl. And the other way around as well.

Carl, I’ll PayPal you the 7p difference if you log off for the evening and take a long hard look at yourself and your penny pinching ways. 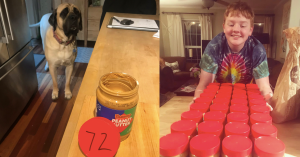