Last night, SpaceX did a test launch for its Falcon Heavy rocket. It’s the most powerful rocket on Earth (well, before it took off). It’s a part of founder Elon Musk’s mission to eventually get people to Mars. And with some smooth product integration from Musk, the rocket also carried a Tesla car along with it, and sent it into an orbit around the Sun. It’s safe to say that a lot of minds were blown.

1. It all started with SpaceX’s Falcon Heavy rocket test launch.

2. The launch is a spectacle that is enjoyed by people of all ages.

4. It’s inspiring a lot of people, all over the world.

5. The simultaneous landing of the two boosters got people VERY excited.

This is one of the most epic videos you'll see for a while 😮 #FalconHeavy #SpaceX pic.twitter.com/jglEvil372

6. But of course the vapers had to come in and ruin it all.

7. And there it is. Watch Starman’s full live stream here.

View from SpaceX Launch Control. Apparently, there is a car in orbit around Earth. pic.twitter.com/QljN2VnL1O

8. The car has a fun little detail.

Printed on the circuit board of a car in deep space

9. Musk chose a poignant song for the launch of the rocket.

I just realized that with the #FalconHeavy launch today we finally got a flying car.

12. There are obviously plenty of jokes to be made about this.

Henry Ford: "I will put a car in every garage."@elonmusk: "Hold my beer."#FalconHeavy #tesla pic.twitter.com/9hF3skwjFS

15. Just so a certain president knows:

Elon Musk is an Immigrant from a SH*THOLE Country, btw. #FalconHeavy pic.twitter.com/RQZhNNSA8c

16. There is, of course, a different way of looking at this.

17. Could there be a sinister truth behind Starman?

18. Meanwhile, the car’s orbit made it to Australia.

19. But don’t think the Australian police is going to let Musk off the hook for speeding. 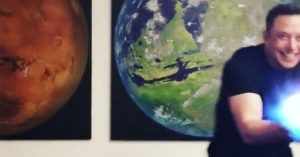 Elon Musk introduces his flamethrowers to the w...