The 90th Academy Awards ceremony was held in Los Angeles on Sunday night. Surprising winners, moving speeches, fresh meme material… the show had it all. Check out the full list of winners here.

1. Host Jimmy Kimmel took a couple of movie stars out to a nearby movie theatre to surprise a few unsuspecting moviegoers.

2. Jordan Peele, writer and director of ‘Get Out,’ made history.

Jordan Peele just made history as the first Black person to win in this #Oscars category 💪🏾 pic.twitter.com/KQlINpAYEy

3. And he couldn’t believe it himself.

4. Netflix got a little ahead of themselves.

5. Guillermo del Toro’s winning ‘The Shape of Water’ has kind of a fishy sex scene in it…

What a touching acceptance speech from Guillermo del Toro! pic.twitter.com/YmMdZcAtPR

I heard somebody refer to “The Shape of Water” as “Grinding Nemo” and I’m never going to get over it.

Water takes the shape of whatever container it is in, this entire movie is horse shit. #Oscars

8. Timothée Chalamet is the youngest Best Actor nominee in decades.

Timothee Chalamet is so young, he thinks the Boss Baby is just a normal boss

9. He also has the most wine-worthy name in Oscar history.

My favorite wine is a 1965 Timothee Chalamet.

Me & some friends spent way too much time on this. Happy Oscar Day!
(3/9 from me, @MatthewKBegbie, & @electrolemon) pic.twitter.com/dy8rbgv0uy

We’re VERY ready for the Oscars.

11. Some solid cosplay from Meryl Streep.

Why did Meryl Streep attended the ceremony dressed as the Fairy godmother from Shrek? #Oscars pic.twitter.com/HQZIQ6jpVX

What realization did Jennifer Garner just come to? pic.twitter.com/pWtycEDEVs

14. Frances McDormand won for Best Actress and her speech is getting a lot of praise.

15. It also lead to people looking up what she was actually talking about.

📈'Inclusion' is our top search on the night, followed by 'cinematography,' 'in memoriam,' 'feminism,' and 'rider.' #Oscars

Congrats to all the winners! 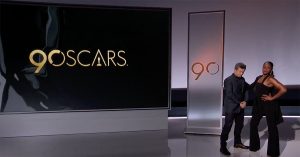