Meet the cutest and most selfie-ready animal in the world: the quokka

Are world events getting you down? Feeling a little sad about the whole thing? Well, fear not. The quokka is here to cheer you right up.

1. Meet the quokka, an Australian animal that radiates happiness.

reminder that quokkas are indigenous to an island where they have absolutely no natural predators, so they neither run from nor attack humans due to the fact that they never had a need for such survival tactics. In fact, they love taking selfies with tourists. And they smile pic.twitter.com/tNWR3DMkUA

2. Let’s take a closer look at those happy faces. 3. More people felt inspired to share their own Quokka pictures.

I never got to visit Rottnest Island when I was in Australia… My sister went however and she sent me her quokka selfies. pic.twitter.com/cfRHAJrVUM

Just dropping my own in here pic.twitter.com/jTTovPk442

For those who wanna see a quokka in action, busy nibbling on a leaf 😍 pic.twitter.com/7YriawSFdV

6. If you ever encounter one, please be careful.

I went ahead and looked this up to see what tragic twist this has, and it’s not too bad.

They like people, but they’re vulnerable to extinction and pretty much only live on that island so you can’t touch them and shouldn’t feed them.https://t.co/xlBk03qCBU

Why am I crying pic.twitter.com/X9RnTBjESW 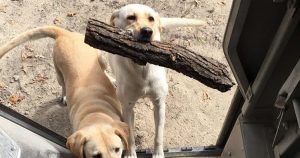 UPS drivers are sharing pictures of dogs they m...